Kline Island is located on Webster Lake in North Webster, Kosciusko County, Indiana. It is the only uninhabited island on Webster Lake, and provides a resting place for boaters as well as a launching point for the community’s annual Fourth of July fireworks display.

The Kline Island Shoreline Stabilization project was completed over three phases, between 2014-2019. TWF partnered with Epworth Forest Conference Center and Webster Lake Conservation Association in the review of the design drawings and construction activities. Epworth Forest provided the construction staging area and access. Funding contributions and project support were received through the LARE Program.

The shoreline of Kline Island in Webster Lake had been under continual erosion for many years due to wave action caused by wind‐energy and recreational boating. The bank’s erosion has slowly reduced the surface area of the island, damaged aquatic habitat, increased water turbidity, and released nutrients into the water.

2013 – DNR Fishery Biologist Jed Pearson originally identified the severity of the bank erosion and contacted Lyn Crighton at The Watershed Foundation to discuss potential programs and funding sources to address the problem. A report completed at that time identified the problem and provided potential solutions, Webster Lake Island Protection Project. The southwest and northwest banks are the most severely eroded banks on the island. A plan was made to complete the full island shoreline stabilization project over three phases.

2014 – TWF and Epworth Forest Conference Center identified funding programs for controlling shoreline erosion. Grant applications were submitted and funding was obtained to proceed with construction of Phase I.

2015 – S&L Environmental Group was commissioned to carry out the project’s construction, consisting of 290 feet of bank protection on the south and southwest sides of the island. The work on Phase I was completed in Autumn 2015.

2016 – Grant applications were submitted and funding approved to proceed with construction of Phase II for an additional 290 feet of bank protection on the west side of the island.

2018 – TWF and Epworth Forest Conference Center applied to the DNR Lake and River Enhancement (LARE) Program for funding to complete (final) Phase III of the island project. S&L Environmental Group was once again employed to design and deliver 300 feet of stabilized shoreline on the west and southeast sides of Kline Island.

2019 – All of Phase III was completed in December 2019. An additional 300 feet of the west, east, and southeast banks were stabilized from further erosion by installing a glacial stone toe‐wall, planting live tree stakes near the top of the stone, and installing island access stone steps.

Ongoing – Live tree stakes will need to be inspected after ice thaw in the spring of 2020 and after heavy boat traffic in the fall to verify planting success and survival rate. If the vegetative cover is not 75% established, additional seeding may be required.

The glacial stone seawall will also need to be inspected after the ice thaws each spring, to check for stones that may have been displaced. Inspections will also take place after peak boating periods and all major storm events. 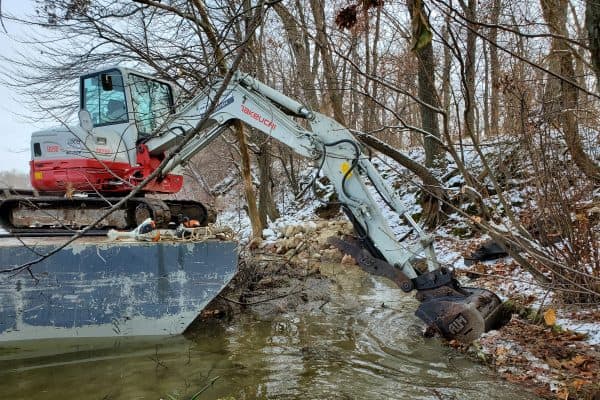